Cameron Dole was born at Jackson County Memorial Hospital while his father was finishing out his twenty-second year in the United States Air Force. Cameron attended schools in Enid, OK; Altus, OK and Chamberlain, South Dakota. After graduation, he attended college in Springfield, Missouri on a music performance scholarship.

After school, Cameron went into church music ministry. Music has always been a part of his life, which began early in life singing in church. Cameron was very interested in instrumental, as well as vocal instruction. Cameron graduated in 1991 from Altus High School as a member of That Altus Band, and 2-time OMEA All-State vocal selection.

After leaving the music ministry, Cameron spent several years working odd jobs to help support his family. He worked in factories, bridge construction, auto detailing, and graphic design. While attending technical school, he began Public Address announcing basketball games at Madison Consolidated High School. Little did he know how this would change his life. Over the next couple years, he found a love for speaking, and eventually ended up in radio.

This ended up in a return to southwest Oklahoma and KQ- Radio. Cameron has been working in radio since 2001. Among his many highlights include talking with some of the most sought after entertainers, musicians, and sports names in the world. His love for music has come full circle, with the opportunity to host several concerts, including Joan Jett, CAM, and the Grand Ole Opry.

His loyalty and pride in Altus have allowed him to play a part in the formation of the Altus Live Committee, which is helping to bring new and exciting opportunities for concerts and other community events. His sports broadcasting dream came true this past year, with the opportunity to be on the microphone for a State Championship broadcast of the 2015 State Champion Altus Bulldogs.

Cameron loves people, and music. His program “The Cameron Dole xperience” on KQ-106 is a perfect blend of the two. He visits with top entertainers from around the world, while sharing the best music at the same time. 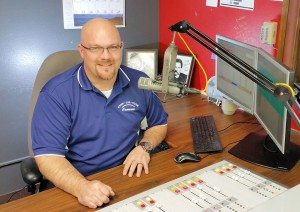